Hello strangers! I know it’s been a little while since I’ve posted… truthfully I’ve been so busy with work and teaching yoga that I haven’t really been eating out quite so much, and even if I had I’m not sure … END_OF_DOCUMENT_TOKEN_TO_BE_REPLACED

Paulie’s has been on my radar and earmarked for a visit for a long long time now. What was stopping me I hear you ask? Truth is – I didn’t know how to get there. I know, morto for me. … END_OF_DOCUMENT_TOKEN_TO_BE_REPLACED

I’ve really got to get around to that Top Ten Pizzas in Dublin post – it’s been on my mind for two years at least! It’s no secret that pizza is one of my favourite things to eat, not at … END_OF_DOCUMENT_TOKEN_TO_BE_REPLACED

So you know how they say Summer bodies are made in the Winter… that’s a scary thought for me right now! I’ve been eating out LOTS over the last few months, often to old faves hence the lack of new … END_OF_DOCUMENT_TOKEN_TO_BE_REPLACED

There is likely to be a bit of a trend over the next few months as I’ve vowed to work my way through a few of the “Best Pizzas in Dublin”. Pizza is my FAVE and I’ve seen plenty of … END_OF_DOCUMENT_TOKEN_TO_BE_REPLACED

My all time fave food is definitely Italian. I could live on pizza and pasta alone! So I was excited to try out the brand new Fiorentina on Parliament Street. If I remember rightly it used to house Da Pino, … END_OF_DOCUMENT_TOKEN_TO_BE_REPLACED 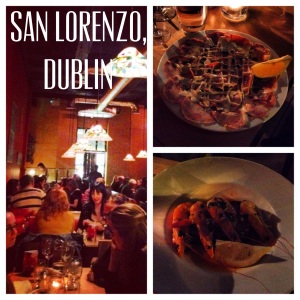 I do love a list… and I love ticking things off that list. And even better when it’s my long list of places to eat! I recently had dinner in San Lorenzo on George’s Street which had been somewhere I’d wanted to try for aaaaages but never got around to. It’s very well known for doing a great Brunch but I’d also heard lots of reports that the food in general was fantastic… plus I’d seen some pics of some tasty looking Nutella Cheesecake – this HAD to be tried out!

First off – excuse the pics as it was super dark so they aren’t great at all!

We visited on a Thursday evening and the place was pretty busy. It was also Dine in Dublin week so there was a good buzz about town. It’s a nice relaxed restaurant, some standard seating and some booths, dim lighting, lots of chatter…. Perfect for a good catch up over some food.

Something I hadn’t heard of was the view from the loo… a large window overlooks the kitchen – reassuring that they have nothing to hide and you could have a good nosey at the chefs cooking if you really wanted to!

While San Lorenzo is an Italian restaurant, it’s  not your standard pizza and pasta place. Starters had a mix of calamari salad, chowder, pan fried gambas, duck liver bruschetta, tortellini or porchetta, priced between €8 and €12. E went for the prawns and I chose the porchetta. I’d never tasted it before and given the hype over the new pizza and porchetta restaurant up at Grand Canal – I thought I’d give it a try!

The prawns arrived with their shell still on which I thought would turn E off, but they peeled away easily and the prawns were succulent with plenty of chilli and garlic. 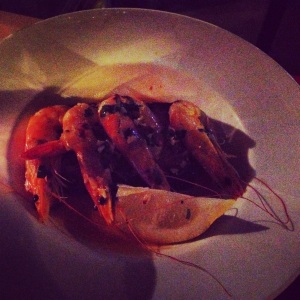 My porchetta was a HUGE portion and I was surprised at how good it was. Served with tuna mayo and capers it was zingy and the meat was super soft.

There was lots of choice for mains – scallops, salmon, striploin steak, slow roast pork belly, yellow fin tuna, barnyard chicken breast, a veggie pasta dish and venison. I usually go for fish for at least one of my courses but decided on the venison and E got the chicken. Most dishes were priced around the mid 20’s.

The chicken breast was served with creamed sweetcorn, parsnips, duck fat roasties and some silver skin onions. I often find that chicken can be overcooked and dried out but this was juicy and extremely tasty and the roasties were to die for. 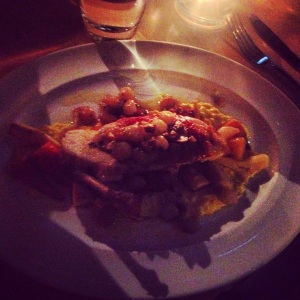 The venison was cooked medium and was served with red cabbage, cranberry and the most amazing parmesan gratin potatoes. E wouldn’t touch anything creamy of cheesy so I had the whole portion to myself and it was without doubt the best gratin I’ve ever had – my mouth is watering just thinking of it now! The meat was cooked perfectly and paired so well with the red cabbage and cranberry. Not being a fan of fruit with savoury usually I had prepared myself not to like that part!

So by now I was stuffed… but there was no way on earth that I was skipping dessert after looking forward to the baked Nutella cheesecake! E went for the Lindt milk chocolate pot which came with amaretto biscuits and I of course got the cheesecake. As if we didn’t have enough of a chocolate overload there, the cheesecake came with a big ball of chocolate brownie ice cream – I’m sure most people would be about to pass out with all the food and chocolate but we are complete chocaholics and devoured it. 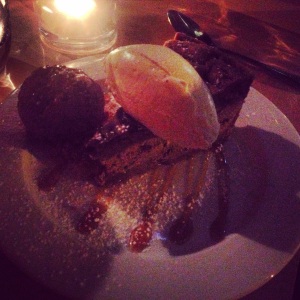 We left super satisfied and without one single complaint about the food we’d eaten. They offer a great lunch menu and early bird option too – I would 100% recommend and I will 100% be re-visiting! 🙂

It’s been so long since I’ve even seen the sea 🌊 Stopped for a look out on the way home from shopping... counting down till the 20km kicks in and we can get back to walks on the beach 💙
That Summer where the furthest we went was to the back garden for a Rose by the fire ... whilst I know how lucky we are, I still can’t help but be hit some times by how much I miss “normal” 😭
Was a busy bee today 😋 🍓
Buying flowers every few days for some colour and lightness in heavy times 💐 🌷
For the next while I’ll be missing teaching in the studio and trying to get comfortable teaching online 📹 Ashtanga (modified Primary Series) this Tuesday at 7.30pm with @yogadublin ... class via Zoom. 💜
For no reason other than not saving anything for “special occasions” any more ... tonight there will be pink Moët from the so far unused @ashfordcastle champagne glasses. - I was “saving them” (for what like?! 😂) What a week guys... what a month 😔 .... one day at a time. Hope everyone manages to find some “niceness” over the coming weekend 💜
Brekkie of dreams in @thegreenerymh 🥑 🍅 😋. . . . #food #foodie #instafood #foodporn #brunch #breakfast #avocado #dublinfoodie #vegetarian #vegetarianfood
The catch ups are few and far between but always the best fun 🍾🥂
Laugh Tay, Glenmacnass Waterfall and Sugarloaf views... such a beautiful day ☀️ 🏔. . . . #ireland #insta_ireland #discoverireland #icu_ireland #irelandtravel #ireland_gram #outdoors #nature #wicklow
Well landing in the storm was fun ✈️😱 Last few pics from a great weekend in Vienna 🇦🇹
Finishing off the trip with some Sachertorte 😋. . . . #sachertorte #cake #austria #vienna #food #foodie #irishfoodie #foodstagram #instafood #chocolate
Sunny day strolling around Vienna ☀️. . . . #vienna #austria #travel #instatravel #travelpic #travelpics #wanderlust #travelgram #europe 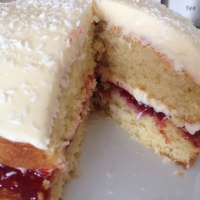